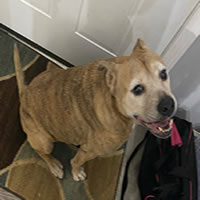 Charlie
“My dog Charlie is about 10 years old. He has been on many different store bought foods over the years but in the last 3 or 4 he progressively kept having more allergy symptoms no matter which foods we tried. I finally decided to allergy test and found A.T. My Pet. I couldn’t believe how many things to which my poor sweet Charlie has a reaction. Of the 121 items he has a reaction to 61. Unfortunately, we were unable to find a food that would accommodate his extreme allergies, so we opted for a raw diet. He has flourished being able to retain the much needed nutrients. In a short time he has gained nearly 20 lbs. He is healthy, and happy for the first time in a long time. Thank you so very much. This has been the best investment I’ve made in regard to pet health.”
Charlie. Stephanie Polley

Otto
“Here are some before and after pictures of Otto’s back legs. That’s where he would chew the most. You can see where he was pulling his hair...it looks like his leg was shaved. Now his hair is long and full. No more red, sore spots either. Thanks for everything!”
Otto. Kristen Laney

Kubota
“I wanted to write you to let you know how much you have changed our Blue Heeler (Kubota's) quality of life. Kubota is 2 1/2 years old and when he turned approximately one he started having extremely bad ear problems. He would scratch behind his ears so hard that he made a high pitched scream and he would rub his ears on the floor until he was exhausted. He also began to scratch all over his body continuously and he started shedding badly.
We have spent unknown hours and dollars at the vet trying to find the cause with no results. His veterinarian actually wanted to send off cultures at a cost of thousands to try to find the cause. He suggested we try to narrow down what might be causing an allergic reaction. So we did and we came to the conclusion that it was chicken, or any fowl. So at that point we stopped giving him all bird products. Well, that helped for a bit but it only came back with a vengeance.
We received the results a few weeks ago and we were astonished. Kubota was not allergic to bird products at all. Instead, he showed to highly reaction to Lamb. The one thing that we were giving him daily in his canned food. He also shadowed the same reaction to peas which is an ingredient in the dry food we were giving him. You can imagine how bad we felt knowing that we were causing his pain. Now, for the good part. We immediately switched Kubota to a beef and chicken high quality food with zero lamb, peas or squash. All of his no no's. Two days after switching to the proper diet, he completely stopped scratching his ears, his overall scratching decreased drastically and he hardly sheds at all. Best of all... no squealing from the ear pain. Kubota is happy, healthy and the wonderfully beautiful part of our family that you see in the picture. My husband and I cannot thank you enough. You have given us our dog back. ”
J. Fersh. Wittneben, Angleton. Texas

Ernie
“We were fortunate enough to be included in the testing of this product and our results really helped us with the itchy coat Ernie was experiencing. We assumed he was allergic to chicken but it turns out he had reactions to salmon and some other fish. This information really helped us with his diet. ”
D Fersh, Toronto Canada 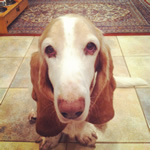 Douglas
“We had already tested Douglas and were aware of most of sensitivities Allergy Test MY Pet® confirmed them and also confirmed my suspicion he is allergic to laundry detergents and household cleaners. ”
B St. Denis, Pompano Beach Florida

Lincoln
“Lincoln was used as a test dog for the Allergy Test. We didn’t think he was allergic to anything. Turns out he reacts to yogurt and other dairy products. So good to know! ”
L. McMillon, Austin Texas